Skip to content
On Friday last, 16th, Midleton CBS Past Pupils Union hosted the 55th annual student awards. Students from 1st to 6th year received awards for a mix of sporting accomplishments, academic endeavours and achievements. Students also received recognition for the positive contribution they made to the school in the last year. Denis Clancy and Ger Millerick were presented with the PPU’s highest awards, gold watches recognising their achievements in Leaving Cert 2018 and their contribution to the school community. The awards were presented by Marvel comic book artist and past pupil Will Sliney and PPU President Michael Hayes in front of the assembled school community. Congratulations to all the award recipients.

We would like to extend our sincere thanks to Will Sliney for his time and the insight into his work with Marvel. Thanks also to all the members of the school who assisted with the event.

More photos of the event can be found in the Gallery 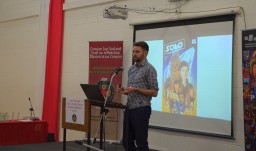